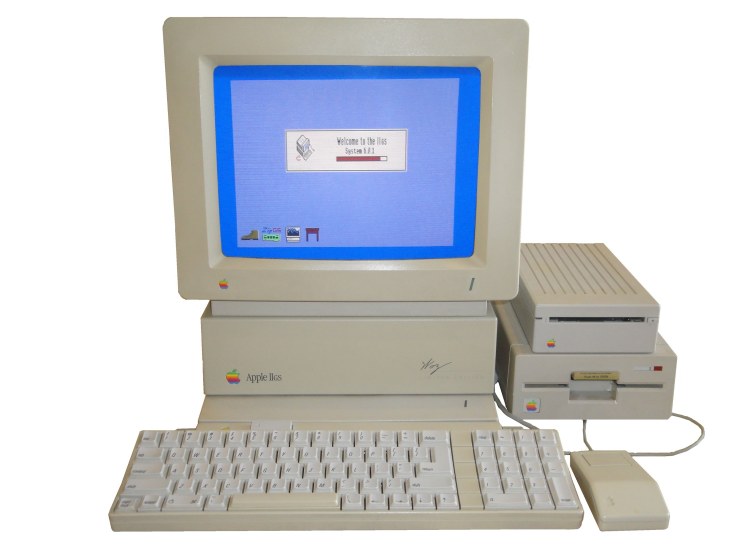 The Apple IIGS (styled as IIGS), the fifth and most powerful model of the Apple II family, is a 16-bit personal computer produced by Apple Computer, Inc. While featuring the Macintosh look and feel, and capabilities similar to the Commodore Amiga and Atari ST, it still remains backwards compatible with earlier Apple II models. The “GS” in the name stands for “Graphics and Sound,” referring to its enhanced multimedia hardware, especially its state of the art audio. The machine is a radical departure from any previous Apple II, with its 65C816 16-bit microprocessor, direct access to megabytes of RAM, and mouse. It was the first computer produced by Apple to use a color graphical user interface (color was introduced on the Macintosh II six months later) and Apple Desktop Bus interface for keyboards, mice, and other input devices. It is the first personal computer to come with a built-in wave table synthesis chip, utilizing technology from Ensoniq.

The Atari ST is the first personal computer to come with a bit-mapped color GUI, using a version of Digital Research’s GEM released in February 1985. The 1040ST, released in 1986, is the first personal computer to ship with a megabyte of RAM in the base configuration and also the first with a cost-per-kilobyte of less than US$1. The Atari ST is part of a mid-1980s generation of home computers that have 16 or 32-bit processors, 256 KiB or more of RAM, and mouse-controlled graphical user interfaces. “ST” officially stands for “Sixteen/Thirty-two”, which refers to the Motorola 68000’s 16-bit external bus and 32-bit internals. 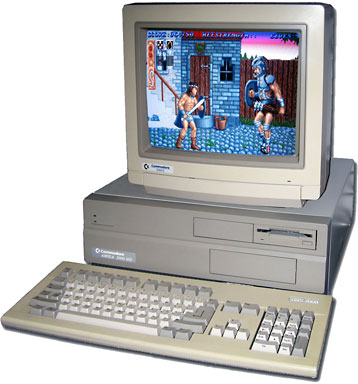 The Amiga 2000 is a personal computer released by Commodore in March 1987. It was introduced as a “big box” expandable variant of the Amiga 1000 but quickly redesigned to share most of its electronic components with the contemporary Amiga 500 for cost reduction. Expansion capabilities include two 3.5″ drive bays (one of which is used by the included floppy drive) and one 5.25″ bay that can be used by a 5.25″ floppy drive (for IBM PC compatibility), a hard drive, or CD-ROM once they became available. The Amiga 2000 is the first Amiga model that allows expansion cards to be added internally. Not only does the Amiga 2000 include five Zorro II card slots, the motherboard also has four PC ISA slots, two of which are inline with Zorro II slots for use with the A2088 bridgeboard, which adds IBM PC XT compatibility to the A2000. 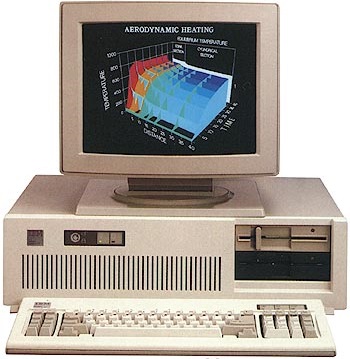 The IBM PC AT was the successor of the PC and the XT. IBM added a lot of new features: they abandoned the old Intel 8086 to the Intel 80286, so the PC AT used new 16 bit expansion slots.

The PC AT had a new version of the Microsoft OS: MS-DOS 3.0 which could manage the new 5.25″ floppy disk format (1.2 MB), the new hard disk capacities (20 MB and more) and allowed file sharing. It had a new keyboard too (the same we use now, more or less) with cursor keys and a key that could lock it.

This computer was revolutionary, but it was the last time IBM imposed a standard to the PC clone industry. The next year, the first PC based on a 80386 was made by Compaq and IBM failed to impose the PS/2 standard in 1986.

The Apple IIGS used a Motorola 65C816 processor running  at 2.8 MHz. The Atari ST and the Commodore Amiga computers used the Motorola 68000 processor running 7 MHz. The IBM PC-AT and clones of that machine utilized the Intel 80286 processor running at 12 Mhz. The Macintosh, released by Apple in 1984, also uses the Motorola 68000, but it utilized a 1-bit display system (black & white). Hence, I have decided to leave it out. It is the most important computer in the 16-bit revolution. I say that because it is the only computer that has stayed in continual production since it’s introduction.  Since the original Macs didn’t have a color display, I decided to leave it out of this blog.

Recently, the Amiga has been reintroduced as the A-Eon AmigaOne. This new Amiga is built on PowerPC architecture. It’s an amazing Amiga. I have one. It’s definitely not the A2000 as focused on in this blog.

Other computers of the era had 16-bit microprocessors. For example, Texas Instruments 99/4a used the TMS 9900 CPU. It’s a 16-bit CPU, but it is utilized in an 8-bit architecture. Texas Instruments left the home computer market in 1983, thus orphaning their computer system. Had TI stayed in the market with their revolutionary 99/8, with their 16-bit TMS9995 microprocessor, it may have been included in this blog.

All three of the subject computers in this blog still have a very active community. Most of it good, some not so good. I would prefer less bashing of these systems, but all three have there own unique set of positives. What still amazes me is the continuing development of these systems.

The Apple IIGS still has software and hardware development. Mass storage systems, RAM expansions and even the resurrection of the TransWarp accelerator has taken place. The OS has even gotten an update after more than 20 years of non-development.

Check out this site of IIGS upgrades: GGLABS

The Atari ST computers have boasted their own hardware developments and software enhancements. The Gotek drive can replace that now cumbersome floppy drive. CPU accelerators are available as well as 4 megabyte RAM expansions.

Check out this website for Atari upgrades: exxos Atari Pages

The majority of development has taken place with the Amiga. The Commodore ceased to exist in 1994, but that didn’t stop developers. There has been continual hardware support. 68030/68040/686060 and PowerPC accelerator have been released. Recently the GPL TF530, 68030 Accelerator card, developed by Stephen Leary has hit the scene as a low cost enhancement for A500/A2000 and even Atari ST computers. Additionally, the Vampire has burst on to the scene giving the Amiga a boost of power that wasn’t even dreamed of by the original developers.

For Amiga upgrades, check out AmigaKit

For owners of these original 16-bit systems, there are a lot of available options. In some cases more so than when these computers were mainstream.