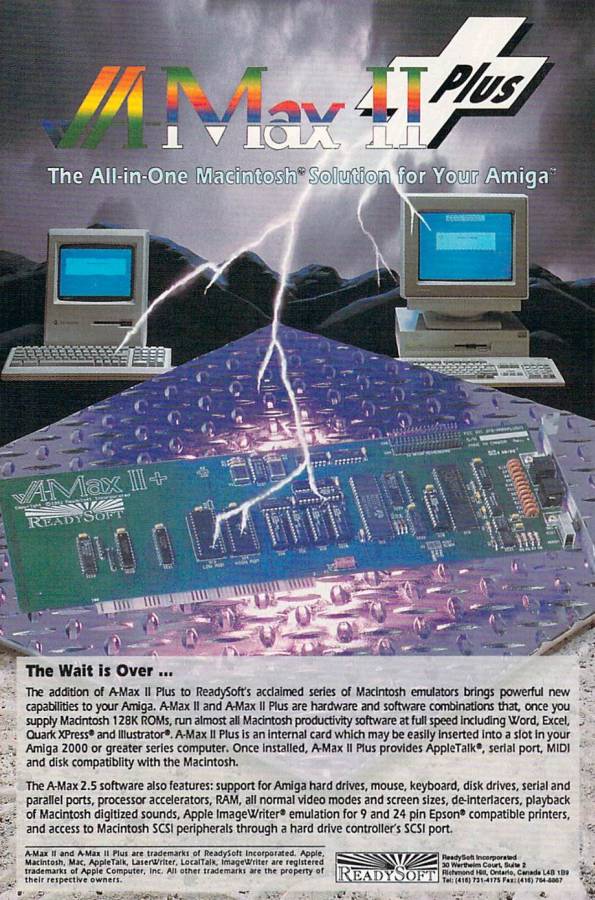 In the donation, I almost jumped out of my skin to find this Readysoft A-Max II Plus box. When I had my original Amiga 2000 system in the early 1990’s, I had one of these cards in my system. At the time, I was attending Cisco Junior College in Abilene, Texas. Amiga’s were definitely not mainstream at that school. I didn’t want to buy a new PC and a Mac was out of the question due to their high price tag. This card came to the rescue.

I had a PC Bridgeboard in my 2000, but is was only an 8088. It was far too slow to really do anything. By this time 80386 processors were the norm and Windows had taken off. I really couldn’t afford a GoldenGate 386 or a Commodore 2386 bridgeboard.

I found an A-Max II Plus card on the Usenet groups for the then awesome price of $200. This price was far better than the prices of Mac LC II and LC IIIs were going for at the time. Yes, the A-Max II is not color like a Mac LC, but I didn’t need color as I was just working with documents. (Color came later with A-Max IV).  This card opened up an entire world of new software on the Amiga. Not only did you have the entire library of Amiga software, but the ENTIRE library of Macintosh software. I was even able to run AOL software for school research. Imagine that, running Mac software on an Amiga at full Mac speed! This, of course, depended on what processor you had in your Amiga.

What’s in the Box:

The A-Max II Plus board:

There are two ROM sockets for 128 kB Apple ROMs (Labeled 1 and 2 in the above photo). You must supply the Mac 128K ROM in order for this board to work. In the beginning Apple would sell you the ROMs. Until Apple realized what people were doing with them and stopped selling these to the general public.

The Amiga floppy drive ribbon cable connects first to the board (bottom connector), then to the disk drive (top connector).

Additionally, there are two serial ports: a printer port and a modem / MIDI port

The printer port is used for AppleTalk and the modem or MIDI functionality can be switched on the back of the card.

Installing the board into an A2000: 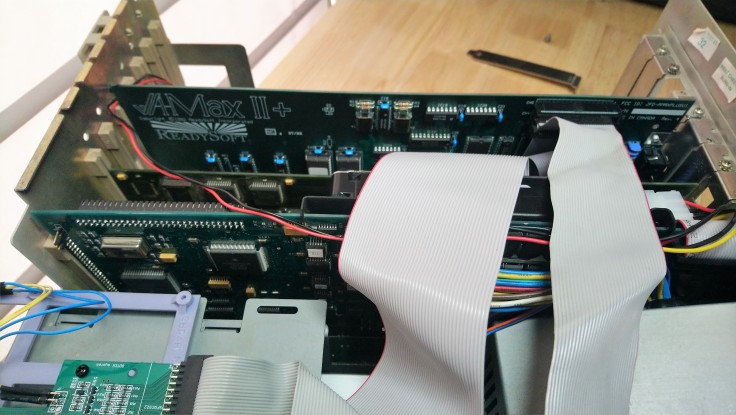 Install the program software found on the Program disk included in the A-Max II Plus package. Installation to hard disk is easy via the “Install A-Max” icon. Once installed to your specified location, in my case: Work:A-Max,  you will see the “A-Max Startup” icon. Double-clicking will launch the emulator. 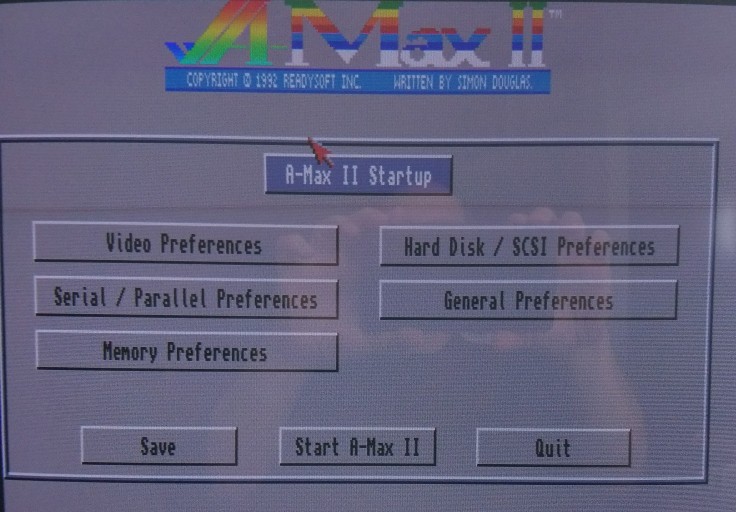 This program allows you to configure the the emulator. There are five preferences. 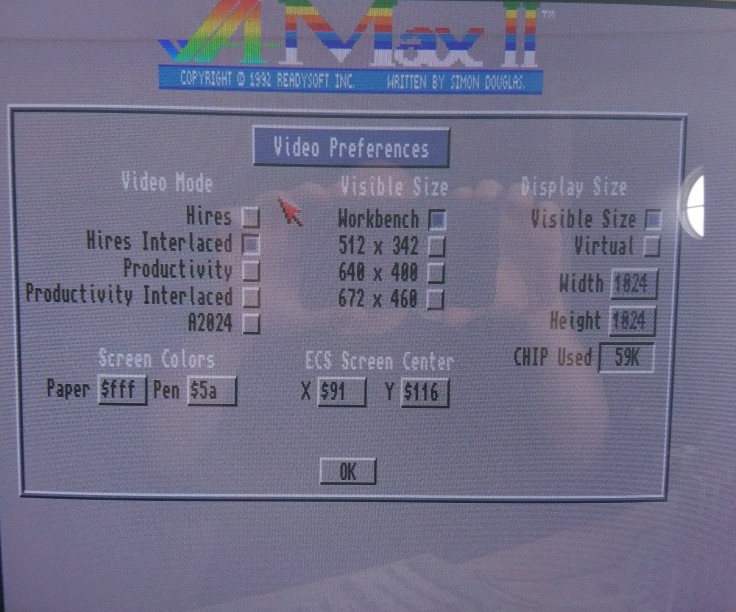 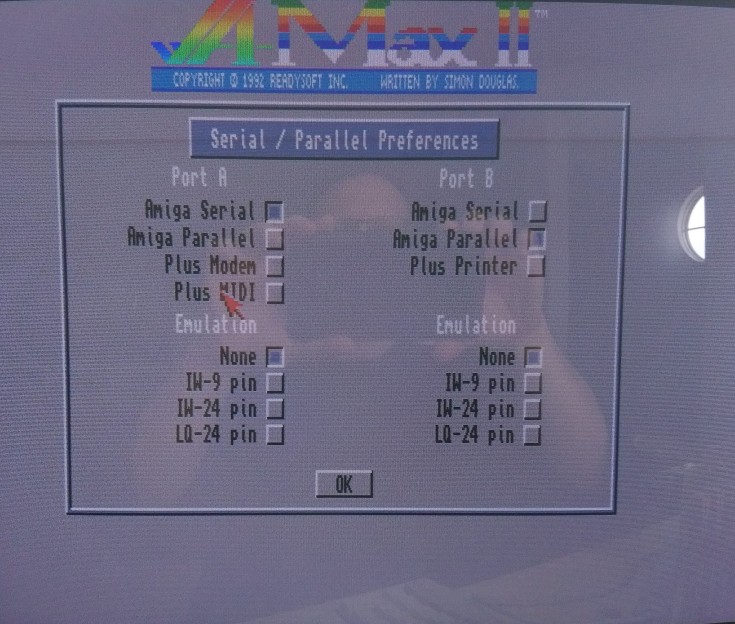 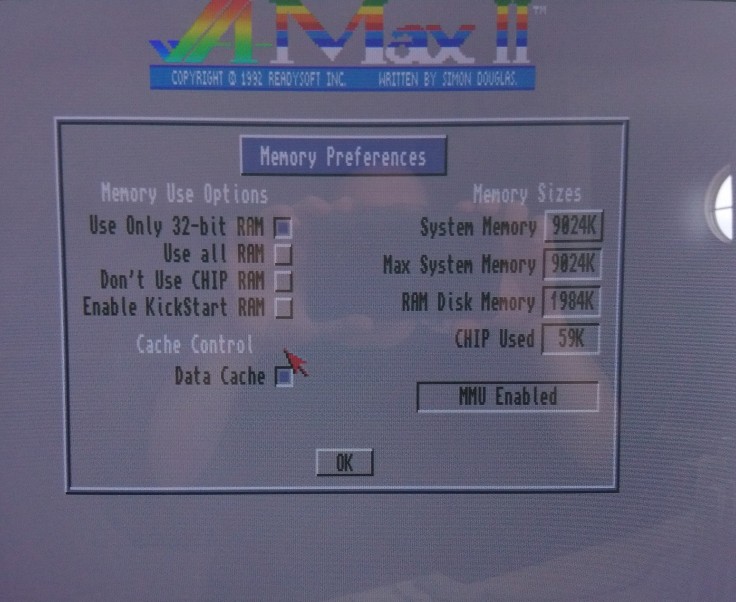 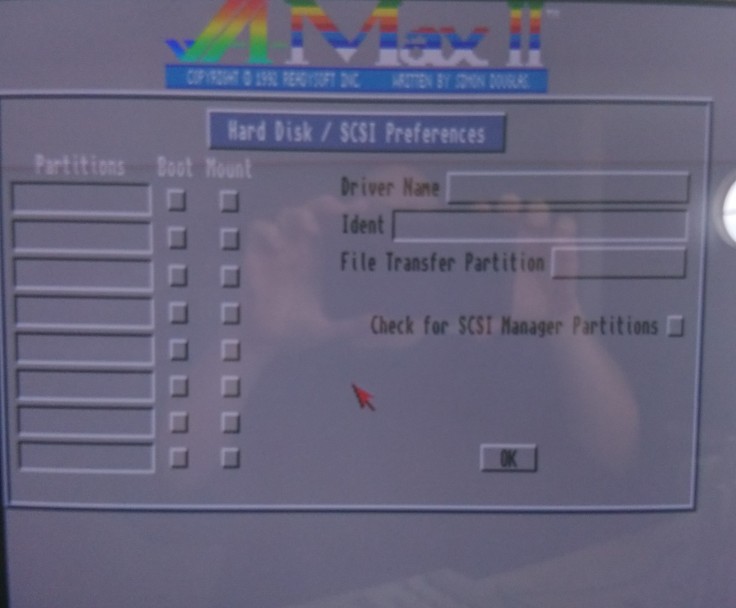 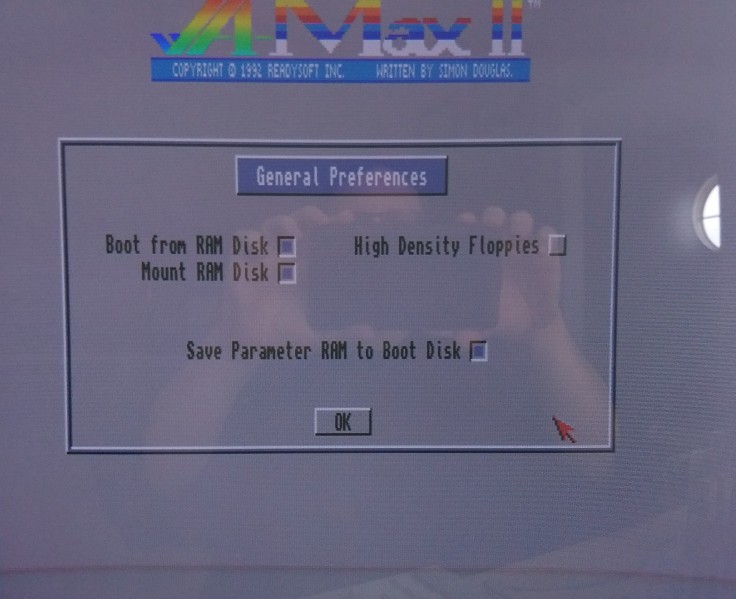 Once these preference are set to your liking, you click on the “Start A-Max II” button at the bottom of the initial Preferences Menu screen. At this time, the emulator will launch. 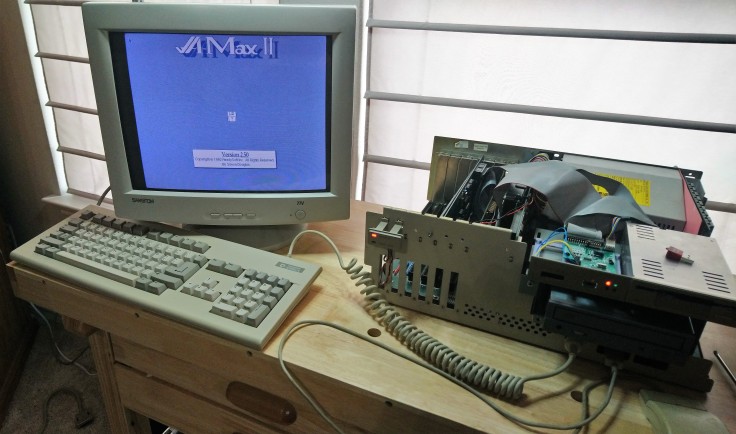 Once launched, you will be greeted with a Flashing “?” inside a disk icon. This is normal Macintosh behavior when it is looking for a boot disk or “System software”.

As of right now, I don’t have any Macintosh System 7.0 software to install. I will have to hunt the software down on floppy disk.

One thought on “A-Max II Plus by Readysoft”